Ashing Lane Nature Reserve is made up of areas of woodland and meadows of different ages, created by volunteers on what was once agricultural land.  Watts Wood and Pickerings Meadow came first in 1990’s on land donated by Sylvia Watts and Elsie Pickering to Lincolnshire Wildlife Trust, and have been planted and managed by the family and LWT ever since.  In 2009, the local landfill tax credit charity WREN bought adjacent land for LWT to create new meadows and also Monks Wood, managed by Nettleham Woodland Trust. The final area purchased by Lincolnshire Cooperative Ltd in 2012, to celebrate its 150th anniversary. It has since been planted and managed by NWT.
​Details about  species and habitat  at Pickering's Meadow and Watts Wood on the Lincolnshire Wildlife Trust website.  Just click on the names here.

The main roads route from the Lincoln bypass - copy and paste these instructions to help you find ALNR
What3Words for the Ashing Lane turn off the A46 - dripping.initiates.glosses
...and for the LWT car park - stream.callers.ownership
The marker on the map is placed at the Threshold, easily recognisable from the picture in the header at the top of each page.  The reserve can be accessed from the A46 north of Lincoln, near Dunholme.  Ashing Lane is narrow, uneven and has ditches to the sides, so if you arrive by car drive slowly and carefully. There is a car park on the right close to the indicator shown on the map (see also the detailed map of the site).

You can also arrive by the footpaths or bridleways that lead to and through the reserve. 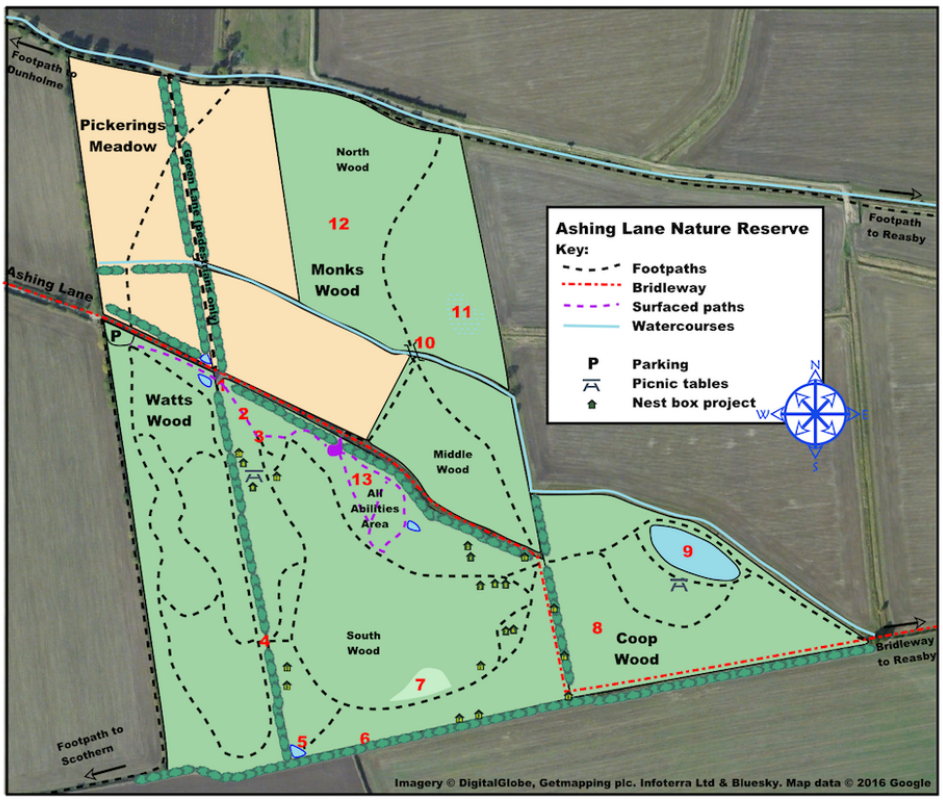 ​The red numbers on the map will lead you round the woodland, the different features are described below:

Basketry Willow
An area of Coop Wood has been devoted to growing some willows for basket making.  The species of willow planted are some of those that used to be grown in the Trent Valley in Lincolnshire when basket weaving was a common trade - before plastic carrier bags!  The plan is to be able to run basket making workshops to introduce people to the craft.

Wild Flower Meadow
We are working with the Forestry Commission at Chambers Farm Wood to develop a greater diversity of native wildlflowers, initially on a small area in the All Abilities Area.  Many species are starting to show well throughout Monks Wood and the butterflies were certainly finding the plants last summer.

Planting into the corn stubble started in March 2009 and completed in Dec 2010. The majority of the work was carried out by the local community on a voluntary basis.  Trees of 60 - 80 cm in height were planted at 2.4 metre spacing and protected with spiral guards to protect them from rabbit and hare damage. A total of 22,000 trees and shrubs have been planted.

The land is heavy wet clay, so in order to provide all season public access a network of raised rides (walks) were created and sown with grass. The verges of the rides were also sown with wild flower seeds.

During the first four years the trees were spot sprayed around their base with herbicide and inter row mowing carried out to control agricultural weeds. The trees are now well established and require little maintenance for the next twenty years or so, although some coppicing of hazel and willow will take place.

Open space is an important element of the design and mowing and raking of the rides, margins and woodland glades is carried out throughout the summer and autumn.